People were extremely frustrated at the sham consultation process conducted by the LXRP and the refusal of the LXRP to provide people with clear information.

The people who were invited to attend the meeting but who were missing in action were the Level Crossing Removal Project CEO Kevin Devlin, local Pascoe Vale Labor MP Lizzie Blandthorn and state Infrastructure Minister Jacinta Allan.

Our sincere thanks to Fiona Patten MP (Northern Region MLC), Tim Read MP (Brunswick), and Cr Natalie Abboud (Moreland Mayor) for attending and being on the panel. Moreland Councillors Jess Dorney, Mark Riley and Sue Bolton were also present and attending the meeting.

The large number of people filling the hall to capacity showed that people want information and want to argue for a good outcome for this project. It was estimated about 160 people were in attendance, many of them standing at the back of the hall.

Bruce Francis from the Upfield Urban Forest compered the meeting in a very effective and straightforward manner.

The Coalition Key Demands were articulated and expanded upon:

Various aspects were highlighted, including the history of the establishment during 1911 of Moreland Reserve, a part of which is now known as Gandolfo Gardens at Moreland Station.

The original briefing to Counncillors indicated limited accessibility of stairs and single lifts at each platform at Moreland; and stairs and 2 lifts on the east side city bound Coburg platform and stairs and one lift on the west side Upfield bound Coburg platform. It was highlighted in the briefing that this was far from sufficient to meet accessibility requirements and guarantee redundancy for breakdowns and maintenance.

According to Mayor Abboud it now appears the LXRP have increased access design parameters to 2 lifts per platform being provided. But this is still highly insufficient with what is required and supplied at other stations. For more information see our news article: Accessible stations? Moreland Leader: Commuter Anger Ramps Up.

Similarly, the LXRP have briefed Councillors that both a walking path and dedicated bike path will be provided at ground level. But this does not resolve that removal of level crossings will reduce the commuter cycling flow with removal of the Upfield Wave effect, and maintains the high level of pedestrian/cycling conflict at the crossing points and around station precincts.

Level Crossing design needs to substantially improve and future proof the arterial cycling route as cycling continues to increase in Moreland. Counts conducted at Moreland Road between 2017 and 2019 showed a doubling in cycle numbers for a 24 hour period. Cycle numbers tripled for the morning peak. At Coburg station there is a substantial conflict between north-south pedestrian and cycling traffic and west to east pedestrian traffic. For more information and some of the data on active transport movements see Submission: Cycling infrastructure for Coburg level Crossing Removal Open space Feedback

Two motions were put to the Town Hall meeting:

1) This meeting calls on the government and the LXRP to incorporate the following wording into the Planning Scheme Amendment for the project:

Vote by show of hands. Motion was declared carried unanimously.

2) We express our extreme disappointment at Lizzie Blandthorn’s, LXRP’s and Minister Jacinta Allan’s absence from today’s community meeting, we call on them to work with our community in a genuine way.

Vote by show of hands. Motion was declared carried unanimously. 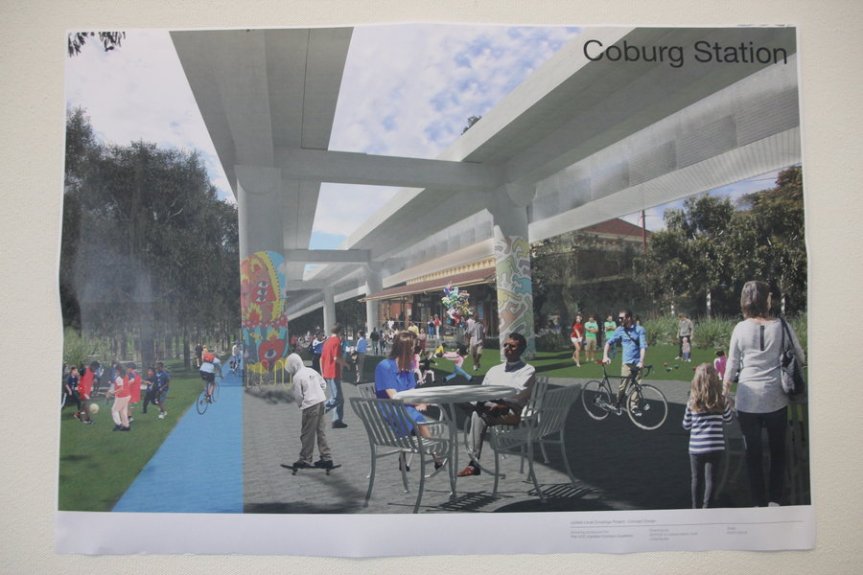 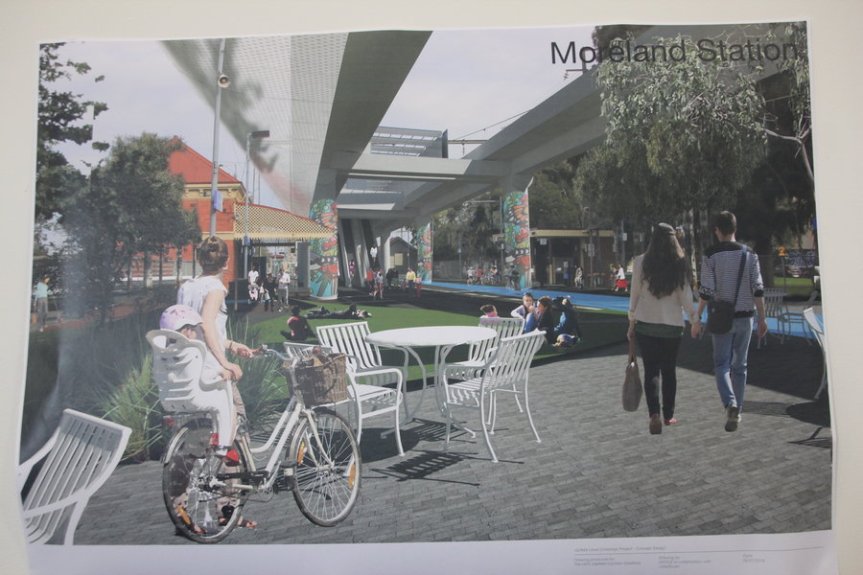 Proposal for the Coburg Station to straddle Bell Street in order to improve pedestrian accessibility. Note veloway in Section A-A. Veloway indicated in blue on plan on the west side, as well ground level path. Lifts and escalators on both sides of Bell Street. 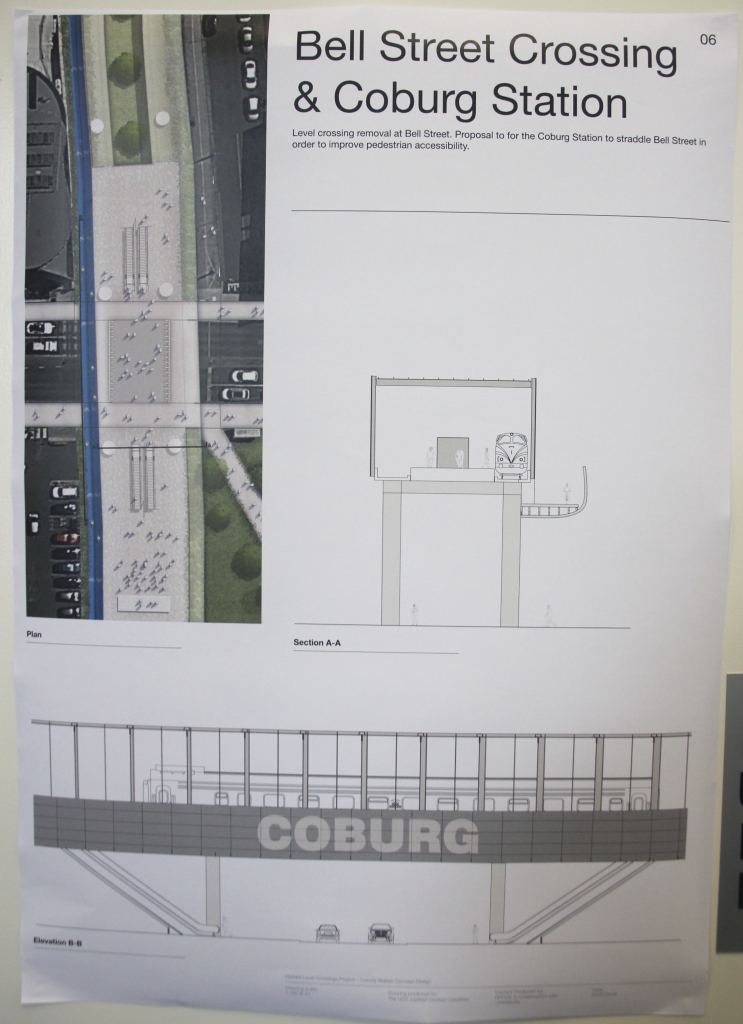 40:00 Question 1: What briefing with Council by LXRP has happened so far. Response by Cr Abboud on bike paths and lifts. LXRP have already changed access design increasing number of lifts since Councillors were first briefed. LXRP committed to a footpath and a separate dedicated cycleway between the stations.

42:45 Question 2: On use of Council funds for advocacy, design renders.

47:35 Question 4: Any thought given to level crossing removal in Brunswick?
Fiona Patten and Tim Read responded. No immediate plans at the moment, but this is due to spreading out the funding for these projects

50:00 Question 5: From Carmelina – Has an occupational therapist endorsed the design?
Response: no formal designs are available yet to be assessed.

52:50 Question 7: Question by Robbie Napper, an urban mobility design expert with Monash University. Negative Comment on cycling amenity of the Djering Trail along CD9, positive on veloway vision but providing access ramps difficult, but maybe should be looking at traffic light priority for bikes as a plan B. Asked, where is the factual basis of our passion? “Passion will get you out of bed in the morning but it won’t win you any arguments with the state government. We need to establish a factual basis for some of these arguments, the real counts of cyclists, the real outcomes on traffic congestion. Do you have any of those? And if not, what is your plan to develop them? That is what is going to win arguments at the end of the day.”

57:00 Question 8: Question on moving crossover to Anstey, and whether it will be reinstated at Coburg or further up the line for short shunting. If it is not reinstated at Coburg or further up, it means residents who access Moreland and Coburg stations will feel the pain of more short shuntings, train cancellations after LX removal is complete.
Response by Fiona Patten and Tim Read that this is a real concern and needs to be put to Jacinta Allan to be addressed as a priority.

59:50 Question 9: Brian Snowden asked Has anyone invited Frank McGuire MP (Broadmeadows) to attend or be engaged on this issue as residents of his electorate also very concerned and affected.
Answer: Yes, he has been emailed the vision, invited to attend. No Response.

1:01:00 Question 10: Babs commented that many people arrive at platform in last minutes before a train. There are large numbers of people accessing platforms far more in a short time than stairs and lifts could cope. Escalators are needed. Stairs can be high safety risk especially when wet. At Footscray station stairs often became wet and posed a high safety risk, escalators had to be retrofitted.

1:02:50 Question 11: Comment by Cr Sue Bolton on LXRP not providing meaningful community consultation, lack of designs for community input, open space consultation is focussed on superficial aspects, not on important issues such as accessibility, improvements to cycling, heritage and vegetation preservation. Argues we are facing a worse outcome.

1:06:00 Question 12: Resident of Cameron Street raises issue of singular lack of communication by LXRP. Raised issue of Train brake asbestos, particulates, PFAS, and health impacts to local residents. Raised that this is the reason why no BBQs are incorporated in landscaping underneath Skyrail developments. Tim Read responded that tyhis is a very real issue of concern.

1:11:00 Question 13: Comment by Jason, President of Don’t Raise the Rails Moreland arguing don’t think a veloway is justified and should not be a focus, but instead prioritise station access.

1:15:00 Question 14: Question by Dan on Moreland Arts Board saying public art in CD9 was very poor. There should be a spend of 1% of project budget on public art. What are you willing to do to get the best outcome for public art as part of this project?

1:18:20 Question 15: Suggestion by Suzanne that if LXRP is listening perhaps go direct to the architecture firm Wood Marsh contracted for the project. Raised what are the implications for nearby businesses affecting trading incomes?

1:20:43 Question 16: Jack Amanatidis (Civil Engineer with a background in transport projects) asked What is our plan B if we cannot achieve our goals?

1:32:22 Question 18: Jasojn from Don’t Raise the Rails asked: Is Council able to work with VicRoads for synchronisation of lights for increased priority for cyclists and pedestrians? What is Council spending on this and integration with Coburg Square development? Has Council requested a Victorian Design Review Panel?
Cr Abboud responded.

1:42:30 Presentation of 2 motions to meeting. Both passed unanimously

High resolution versions of photos of the panel and the meeting are available for download from John Englart’s Upfield Corridor Coalition Flickr Album, as Creative Commons Share alike images.

We acknowledge the Wurundjeri people as the traditional people who occupied the land of Coburg and Brunswick and pay respect to their elders, past present and emerging.